Memorial Candle Tribute From
Beaty Funeral Home
"We are honored to provide this Book of Memories to the family."
View full message >>>
In Memory of
Carol Ann
Gearner
1935 - 2020
Menu
Send Flowers 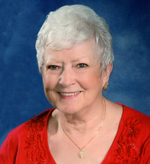 Carol Ann Robinson Gearner was born August 1, 1935 in Winnsboro, TX and passed away peacefully in her home surrounded by her daughter and son-in-law on Saturday, September 26, 2020.

Carol had a love for life. She was very devoted to her children, jobs and sorority. As a young woman, she had a diverse working repertoire. Her most loved job was working in the banking industry as a teller. She was also very active with her sorority, Beta Sigma Phi. She held numerous offices and was awarded Woman of the Year in 2002-2003 and 2003-2004. Her and Marshall Robinson loved going to all of the sorority banquets and activities. Both were fun loving and enjoyed being with other fun loving couples. After Marshall passed she married Wayne Gearner, and continued to keep busy. She and Wayne enjoyed their Sunday drives in his Camaro and taking care of Wayne's numerous Cockatiels. She led a full and fulfilled life.

She is survived by her daughter and son-in-law, Lou Ann Farrell and Jeff Warford, brother and sister-in-law Bruce and Rose Marr, and her sister Vivian Romine. She also leaves behind 6 grandchildren; Jaime and Daniel Davila, James Farrell, Joshua and Jeni Farrell, Pamela (KiKi) and Lynn Bettis, Daniel Robinson, Shea and Kendra Robinson, 8 great-grand children as well as several nieces and nephews.

To send flowers to the family or plant a tree in memory of Carol Ann Gearner (Goolsby), please visit our Heartfelt Sympathies Store.