To share your memory on the wall of Willie Watkins, sign in using one of the following options:

Print
Willie Lee Watkins, a loving and kind husband, father, grandfather and friend to many, passed away peacefully into the arms of Jesus on August 6, 2020, surrounded by his children.

Willie was born to William and Minnie Watkins in Winnsbor... Read More
Willie Lee Watkins, a loving and kind husband, father, grandfather and friend to many, passed away peacefully into the arms of Jesus on August 6, 2020, surrounded by his children.

Willie was born to William and Minnie Watkins in Winnsboro, TX on February 3, 1921. In 1942, at the age of 21 he joined the US Army Air Force and was a crew chief for the B-29 aircraft. He was a true patriot and a proud veteran of World War II. In 1946, he married Betty Huckeba and built a beautiful life with four loving children. They were married for 69 years. He worked for Vick Well Service for 10 years and Renshaw Well Service for 33 years. He retired at the age of 60. He was an active member of Pine Street Baptist Church and a faithful member of the American Legion Post 340. He was an avid walker who put in miles daily around town up into his 90s. He would stop at various businesses to rest and drink coffee. His favorite place to visit became his second home, First National Bank of Winnsboro. He loved all the employees there and spent many hours visiting with friends and fellow coffee drinkers. Willie was a “one of a kind” guy. He embraced everyone he met with a hug, a smile, a story, and endless optimism. He never met a stranger. He will be sorely missed by his family, his church family -especially his Sunday School class “The Second Milers,” American Legion friends, and his buddies at First National Bank. Due to the love of Willie by Winnsboro citizens, Mayor Cameron Wilcox has proclaimed August 11, 2020, to be Willie Watkins Day for the city of Winnsboro. A wonderful tribute for a wonderful man.

In lieu of flowers, the family asked that donations be made to the GAs and RAs of Pine Street Baptist Church because of his enduring love for children.
Read Less

To send flowers to the family or plant a tree in memory of Willie Lee Watkins, please visit our Heartfelt Sympathies Store.

Receive notifications about information and event scheduling for Willie

We encourage you to share your most beloved memories of Willie here, so that the family and other loved ones can always see it. You can upload cherished photographs, or share your favorite stories, and can even comment on those shared by others.

Posted Aug 10, 2020 at 07:50am
To all the family, I always loved when I was outside when Willie was out walking so I got a chance to visit with him. He was a precious person that I was blessed to know and love. My prayers are with you all.
Comment Share
Share via:
SF

Posted Aug 09, 2020 at 12:56pm
Mr. Watkins was a wonderful and kind man. I met him through my ex- husband (Tony Reid). He worked with at Renshaw & several other oil field places. I met him later in my life through one one of my best my best friends (Dana Hart). He was a good upstanding Christian man who never met a stranger. I am so sorry for your loss. He reunited with his his wife in heaven; can you imagine how happy he was to see her! Susan E. Fisher
Comment Share
Share via:
LS

Posted Aug 08, 2020 at 06:26pm
Willie worked for Larry & I after he retired. I loved going to work every day to see what he had up his sleeve. He & Buddy McKnight kept us in stitches about their shenanigans in the oil field. Rest In Peace and kids Betty for me.
Comment Share
Share via: 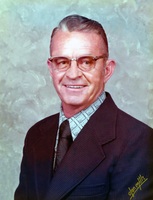