To share your memory on the wall of Madeline McCrary, sign in using one of the following options:

Madeline McCrary, 91, died peacefully on October 13, 2020, at Willow Creek Healthcare Center in Mount Vernon after a six-year battle with Alzheimer’s.

She was born September 24, 1929, in Dallas, to Homer and Vera Hendrix. She graduated from Crozier Technical High School in 1945, where she studied commercial art. She also attended college in Arlington and Denton.

She married her high school sweetheart Albert Randall Hamilton on April 8, 1950, at Grace Methodist Church in Dallas. He was a fighter pilot and was killed in a plane crash on June 18, 1953, at the end of the Korean War. Together they had one child, Teresa Lynn Hamilton.

In early 1957, she married John Earl McCrary at Grace Methodist. She and Terry moved to Winnsboro, where Madeline became involved in church, civic and community affairs. She was famous for dinner parties, style shows and her Christmas Eve Open House.

In the fall of 1966, the McCrary family was joined by Angie Dunn. Madeline and Angie remained very devoted to each other through the years. Angie married at the McCrary home on Coke Road, with John Earl giving the bride away.

When Mark started school, Madeline decided to follow her dreams and opened the Bandbox of fashions at 303 North Main. For 33 years, the shop was known for its unique apparel, impeccable customer service and fabulous gift wrapping. She became enamored with wrapping during her stint at Neiman-Marcus. During high school, she was recruited by Stanley Marcus to help develop specialty gift wrapping. He sent her to New York to study design. She learned those lessons well and put them to good use when the Bandox opened.

She was the second woman elected to serve on Winnsboro’s city council after Mayor Elizabeth Suiter. She was also selected as Woman of the Year by the Chamber of Commerce. She was also a part of the original group who founded Autumn Trails and was in charge of the pageant in its early days. She was devoted to her church, teaching Sunday School and leading MYF for many years.

In 1984, she and dear friend Sara Pollard began a line of clothing that was sold across the country.

After losing her husband in 1990 and later retiring from business, Madeline moved to Tyler, where she was active in The Salvation Army, Habitat for Humanity and Marvin United Methodist Church. She traveled extensively for 20 years, even spending six months living on Maui.

Ever the realist, she moved back to Winnsboro in 2014 and decided to live at the new and lovely Autumn Wind Assisted Living. She had been diagnosed with Alzheimer’s and knew what she was facing, as she had cared for her mother during her battle with the disease.

She faced the future with the same optimism she had applied to her life. She stayed active, going out to eat, taking drives in the country with her friends and family and making new friends at the facility.

She moved to Willow Creek in June after breaking her hip in a fall. She received excellent and compassionate care from staff, Diane Newsome, a former customer and the wonderful Michael Herrera, who decorated her room to make her move more comfortable.

The family is also grateful to the staff at Choice Hospice, including Fran, Jay, Lori, Yvonne and chaplain Ron Smedley. They were devoted to her as if she were a family member.

She was also blessed with devoted caregivers Linda Smith Barton, Kathy Rachal and Linda Vahrenkamp, who brightened her days.

The family thanks First United Methodist Church and Pastor Debbie Lyons for their devotion to Madeline, as her faith ran deep and true.

Cremation under the direction of Beaty Funeral Home. Service to be held at a later date.

To send flowers to the family or plant a tree in memory of Madeline H. McCrary (Hendrix), please visit our Heartfelt Sympathies Store.

Receive notifications about information and event scheduling for Madeline

There are no events scheduled. You can still show your support by sending flowers directly to the family, or planting a memorial tree in memory of Madeline H. McCrary (Hendrix).
Visit the Heartfelt Sympathies Store

We encourage you to share your most beloved memories of Madeline here, so that the family and other loved ones can always see it. You can upload cherished photographs, or share your favorite stories, and can even comment on those shared by others.

Beth and David Parkinson sent flowers to the family of Madeline H. McCrary (Hendrix).
Show you care by sending flowers

Posted Oct 15, 2020 at 09:46pm
I’m so sorry to hear of the loss of Madeline. She taught me so much about life. How to serve others with dignity. Figure sales numbers in my head and how to climb an 8’ ladder in heels gracefully. There will never be a lady so grand.
Sincerely,
Tammy Ballard Henry
Comment Share
Share via: 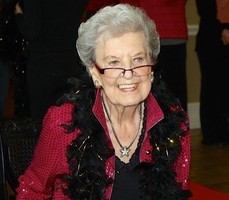