To share your memory on the wall of Henry Hall, sign in using one of the following options:

He was preceded in death by his parents, his 5 aunts, and 7 uncles. He is survived by
His wife, Vera Thomas Hall, of Winnsboro; sons Mark David Hall of Houston and Gregory Thomas Hall of Midlothian; daughters-in-law Elizabeth Cameron Hall (Mark) and Stephanie Luebke Hall (Gregory); grandchildren Katherine Elizabeth Hall, Hannah Alexandra Hall, Samuel Thomas Hall, and Micah Cameron Hall; two sisters-in-law, and 13 nephews and nieces, and many loving friends.

A memorial service to celebrate "Hank's" life will be held on Sunday, July 5th at 3:00 p.m. in the chapel of Beaty Funeral Home in Winnsboro.

In lieu of flowers, donations can be made to The Salvation Army by going to give.salvationarmyusa.org or Hospice of East Texas hospiceofeasttexas.org

NOTICE BY GOVERNOR OF TEXAS....FACE MASK ARE NOW REQUIRED FOR PUBLIC INDOOR EVENTS. PLEASE BE SURE AND HAVE A FACE MASK ON WHEN ENTERING THE FUNERAL HOME. THANK YOU FOR YOUR COOPERATION.

To send flowers to the family or plant a tree in memory of Henry Williams "Hank" Hall Jr., please visit our Heartfelt Sympathies Store.

Receive notifications about information and event scheduling for Henry

We encourage you to share your most beloved memories of Henry here, so that the family and other loved ones can always see it. You can upload cherished photographs, or share your favorite stories, and can even comment on those shared by others.

Bountiful Rose Basket was purchased for the family of Henry Hall. Send Flowers

Truly Beloved Bouquet was purchased for the family of Henry Hall. Send Flowers

Posted Jun 30, 2020 at 06:53pm
Vera,
We are so sorry! We loved the time we lived next door and think of y'all often. Prayers and hugs for you and your family!
Love,
Kristi, Ronnie, Cord,Bailey and Andrew Hankins
Comment Share
Share via: 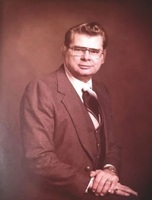