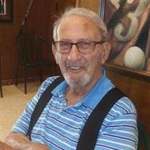 Graveside services will be held at 2:00 p.m. Saturday, February 12, 2022 at Davis Cemetery with Dr. David Higgs officiating under the direction of Crawford-A. Crim Funeral Home in Henderson.

Mr. Brown passed away January 24, 2022 in Winnsboro. He was born January 1, 1928 in Omaha Nebraska to Earl J. Brown Sr. and Daisy Mae (Ritter) Brown. Mr. Brown was a member of Clearwater Baptist Church in Winnsboro and a former member of First Baptist Church of Henderson. He served his country in the United States Navy during World War II.

Words of comfort may be shared with the family at www.crawfordacrim.com.